They wanted me to play with them.

The two youngest wanted to continue our game. 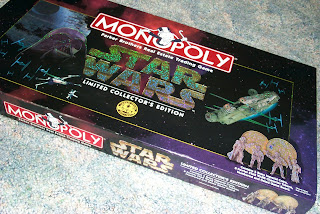 In trying to spend time with them, I'd ended up suggesting a game of Monopoly.

We now have two games going at the same time:  one on my Star Trek: Continuum Monopoly set and another on the Star Wars: Limited Collector's Edition Monopoly set that someone gave me.

I got out the board and set it up.

We could play all afternoon at the rate we were going.

(Of course, I knew we wouldn't.  They would inevitably get bored and want to move on.) 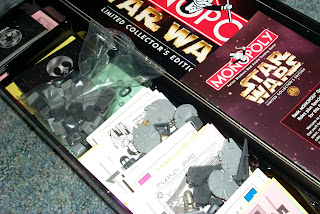 We had our money and properties stacked.

We let all of the players begin on "Go". 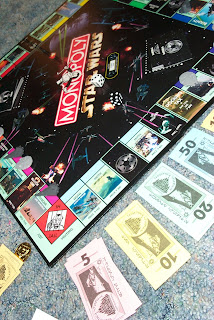 We moved our tokens around the board.

There was always someone low on money.

Inevitably, that person would land on a space that had a plastic ship (the equivalent of a Hotel) resting on it.

Inevitably, that person would not be asked to pay what he or she could not afford.

"Just give me one hundred." or "I'll take a twenty." were commonly heard. 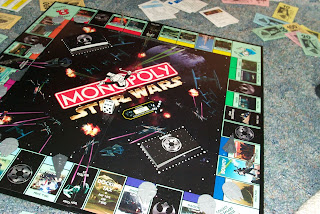 Continuing to break the official rules (at least as I learned them), money began to pile up under the "Free Parking" space.

Taxes, fines, and "Get me out of jail NOW!" money collected underneath the corner of the board.

Inevitably, someone would land on that space.

Inevitably, the other two would clap and congratulate the lucky one on "hitting the jackpot".

Frequently, the lucky winner would then start handing out $100 bills to his or her fellow players. 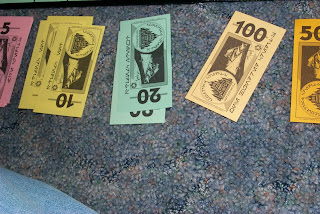 As is also common, I handed over $250 to the oldest of the two youngest (or "the second youngest") in order to pay her for landing on the "Swamp" (the space next to "Go" that costs $60 to buy). 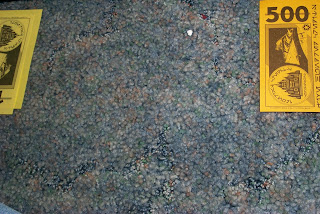 As I turned away to move the dice in the direction of the next player, the second youngest looked at my money.

Noticing that only one $500 remained, the second youngest decided to return most of what I'd just paid while I "wasn't looking". 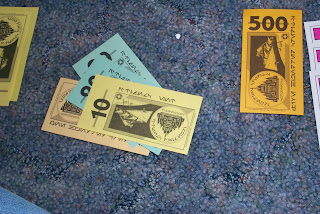 Of course, I noticed, which led to a bit of an argument:

In the end, I gave in, accepting the money and thanking the second youngest for showing such generosity.

We eventually called it quits.

As I placed the items back into the box, I thought, "This is never going to end." 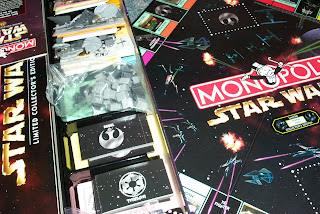 The game of Monopoly is based on taking.

When you land on my space, you are to pay rent.

When you land on property or luxury tax, it must be paid.

When property is traded, it is almost always because one convinced another by offering a large incentive.

The game is based on taking everyone else's money. 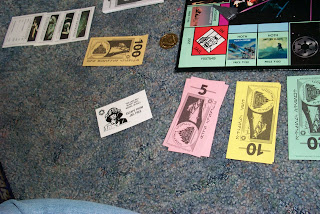 So what happens when you change that dynamic?

When you land on my space, I would like you to pay rent, but if you don't have the money, that's okay.

When you land on property or luxury tax and can't pay it, I will sneak the money from my pile into yours.

When property is traded, it is for the benefit of both.  I will even give you property if you are in desperate need.

I will take care of you.

I will make sure that you survive for at least one more turn.

I will pay your debts. 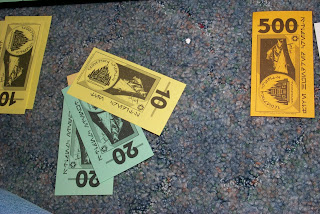 That is why the game will never end.

We play with the second dynamic:  That of people who have had their debts paid by SomeOne and are so filled with gratitude and joy that they can't help but imitate the actions of that One.

Well, at least in Monopoly. 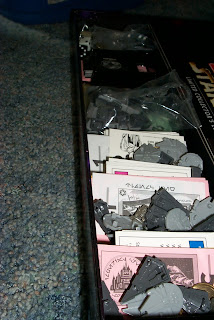 I am amazed by these actions begun by these precious young.

I have found something better.

I will help these two youngest because the rules of the game aren't as important to me as making sure everyone has a chance to play.

I would rather go bankrupt myself than allow one of these two to suffer that fate.

After all, I know what it's like to have my debt paid.

I wonder what the world would look like if people lived the same way the two youngest and I play Monopoly? 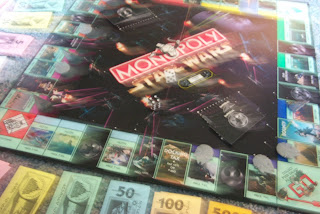 "Those who accepted [Peter's] message were baptized, and about three thousand were added to their number that day.  They devoted themselves to the apostles' teaching and to fellowship, to the breaking of bread and to prayer. . . . All the believers were together and had everything in common.  They sold property and possessions to give to anyone who had need.  Every day they continued to meet together in the temple courts.  They broke bread in their homes and ate together with glad and sincere hearts, praising God and enjoying the favor of all the people.  And the Lord added to their number daily those who were being saved." (Acts 2:41-42, 44-47 NIV)

"All the believers were one in heart and mind.  No one claimed that any of their possessions was their own, but they shared everything they had.  With great power the apostles continued to testify to the resurrection of the Lord Jesus.  And God's grace was so powerfully at work in them all that there were no needy persons among them.  For from time to time those who owned land or houses sold them, brought the money from the sales and put it at the apostles' feet, and it was distributed to anyone who had need." (Acts 4:32-35 NIV)